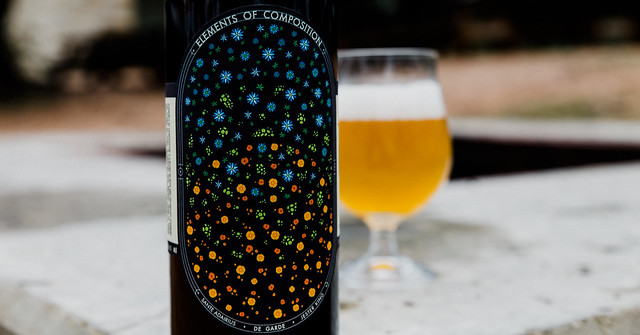 When blend 1 first debuted at De Garde in December of 2016 we called it, “a blend of beer and friendship spanning the course of years.” Well, we’d say that’s even more the case now. Elements of Composition (or EoC for short) was blended all the way back in February of 2016. It has been in bottle now for two years.

Even before blending, it was quite old. We took three year old, 100% spontaneously fermented beer from De Garde and blended it with two year old, 100% spontaneously fermented beer from Jester King, and mature, foudre aged saison from Sante Adairius. Here’s another way to look at how old the beer is at this point — its oldest component was brewed in 2013.

Why does the age of the blend matter? The coolest thing in our opinion about EoC is combining microorganisms from De Garde, Sante Adairius and Jester King, then seeing how they slowly transform the beer. Fermentation is remarkable process to say the least. Seven years in, we’re continually surprised by what wild yeast and bacteria can do to a beer as it matures. Despite being around beer 24/7, year-in and year-out, we don’t get bored with fermentation flavors and aromas. They’re ever changing. When we met in Tillamook in early 2016 to blend EoC, we knew we were just creating a rough manuscript for the beer. We knew the yeast and bacteria would take what we blended and transform it over time into a finished composition (pun intended). At this point, the microbes have now had two full years to slowly take the blend in the direction they’ve figuratively chosen, and we’re excited to share what has transpired.

So why has it taken over a year from the initial release at De Garde for the beer to be finally be released at Jester King? Unfortunately, we ran into label approval issues with the State of Texas. The State believes that the EoC Blend 1 label violates the three-tier system. Its position is that because De Garde is a “manufacturer” of beer, its label cannot bare the name or mark of Jester King because we are a “retailer” of beer. De Garde is in Tier 1 (manufacturing), and we are in Tier 3 (retailing), even though we’re a brewery too (we promise). The State believes having a retailer’s mark on a manufacturer’s label creates an unfair trade benefit for the retailer. Essentially, as we see it, the State is trying to prevent a manufacturer from cozying up to an individual retailer and getting special favors by putting the retailer’s name on its product.

While we understand the State’s rationale and realize the law is designed to fight corruption, we don’t think the law was written with the intent of stopping breweries from collaborating. We think the State is widely casting the law like a giant net, rather than using it like a scalpel to fight instances of corruption. Unfortunately, EoC has gotten tangled up in this broad net.

It’s our belief that breweries should be able to publicly state truthful, accurate information about a beer. The public has the right to know who made a beer and how it was made. We believe the State’s position violates our First Amendment rights to tell the truth about a collaboration beer.

In the past, we’ve stood up for our First Amendment rights. Back in 2011, we won a lawsuit against the State over being able to call beer “beer” and being able to tell our customers where our beer is sold. In this instance, rather than waiting who knows how long for a lawsuit to be decided, we capitulated and agreed for our name and logo to be removed from the EoC Blend 1 label. As you can see from the photos below, new labels were printed with Jester King edited out.

We hope this issue can be worked out amicably with the State in the future. We don’t want to continue on forever with this farce.

As we mentioned, EoC Blend 1 will be released at our tasting room this Friday at 4pm. We have approximately 500 bottles available (750ml/$28). The bottle limit is one per customer per day. We do not have any kegs or bottles to pour, so it will not be available by the glass.

We hope you enjoy this multi-year experiment in blending and fermentation! It was created with two of the breweries we have the highest level of respect and admiration for. We could not be more grateful for the opportunity to work with such special people at De Garde and Sante Adairius, and we believe the results truly are a blend of beer and friendship spanning the course of years.